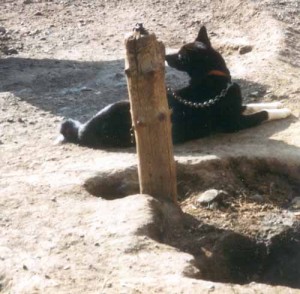 He cannot speak for himself but you can. This dog’s picture was taken at the kennel of a leading musher.

The Iditarod is a dog sled race that begins the first Saturday in March each year in Alaska. In this race mushers (dog sled drivers) force their dogs to run 1,000 miles from Anchorage to Nome in 8 to 16 days over a grueling terrain. This is the approximate distance between New York City and Miami. Mushers press their dogs to run at ever increasing speeds, so that the dogs get little rest or sleep. Mitch Seavey holds the speed record of 8 days, 3 hours, 40 minutes and 13 seconds. This is less than half the time it took to run the first Iditarod race. No dog wants to run so far or so fast, or can do it without enduring great suffering.

At times, Iditarod has been described as an exciting contest of man against nature. These descriptions do not tell us about the dogs’ untold suffering. Dog deaths and injuries are common in the Iditarod, and when they are not racing, the dogs live under inhumane conditions. 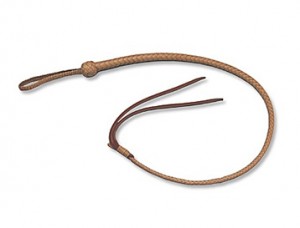 Mushers beat their dogs with quirt whips. The whip has two tails at the end, and a core that’s normally filled with lead shot. Mushers roll up their whips and hide them in their pockets.