The Iditarod requires mushers to belong to Mush with P.R.I.D.E., a group that encourages the abuse of Iditarod sled dogs. P.R.I.D.E. stands for Providing Responsible Information on a Dog’s Environment. 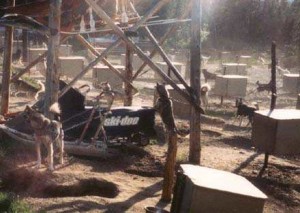 Dogs run to the end of their tethers and are jerked back by their chains.

“It is around one year ago today as I write this, fewer than two weeks before the legendary 2011 Iditarod race start, that, as a dog handler at a private kennel location in Alaska, I witnessed the extremely violent beating of an Iditarod racing dog by one of the racing industry’s most high-profile top 10 mushers. Be assured the beating was clearly not within an ‘acceptable range’ of ‘discipline’.

Indeed, the scene left me appalled, sick and shocked.

After viewing an individual sled dog repeatedly booted with full force, the male person doing the beating jumping back and forth like a pendulum with his full body weight to gain full momentum and impact.

He then alternated his beating technique with full-ranging, hard and fast, closed-fist punches like a piston to the dog as it was held by its harness splayed onto the ground.

He then staggeringly lifted the dog by the harness with two arms above waist height, then slammed the dog into the ground with full force, again repeatedly, all of this repeatedly.”

“In an early phone conversation with Mush With Pride, it was explained that intentional dog abuse is not addressed within their bylaws or objectives; (they) “assume all mushers intend to provide adequate care of their dogs.”

My written requests to add direct abuse to their policy of education have been met with more silence.”

Mush with P.R.I.D.E.’s old guidelines not only advocated killing dogs in cases of deformity, serious injuries, sickness, or old age, but also killing dogs who did not perform well as sled dogs and were “behaviorally unsuitable” as pets. Their new guidelines say that mushers should have a rule for euthanizing a dog. According to Mush with P.R.I.D.E., “It can be as simple as: When the dog is no longer able to ____, then we will euthanize it.” With this rule, Mush with P.R.I.D.E. endorses mushers killing dogs for any reason, including cases of deformity, injury, sickness, old age, not pulling, not running fast enough, not eating within the time allotted, etc.

Because mushers breed many dogs to get a handful of good racers, there aren’t enough homes for all the unwanted sled dogs. Iditarod kennels acquire and breed many more dogs than can be used in the Iditarod race. The reason for this is simple; it is impossible to predict which dogs will become good racing dogs or for how long a good racer will remain a good racer. Therefore, the kennel owner maintains a large pool of dogs, and ultimately many become unwanted or “surplus.”

Most mushers kill their own dogs. Iditarod dogs have been shot, drowned, beaten, clubbed and dragged to death. 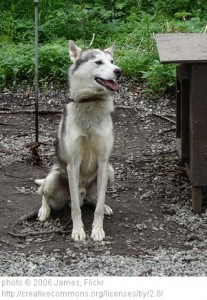 Iditarod dogs live on rocks. It’s very serious when dogs eat rocks because, rocks do not pass and can cause obstructions in their stomachs.

If Mush with P.R.I.D.E. opposed debarking or devocalization, they would say so:

Mush with P.R.I.D.E.’s old guidelines condoned debarking or devocalizing dogs. Their new guidelines say: “If all efforts fail and you can’t seem to get a dog to be quiet, discuss the issue with a professional trainer or your veterinarian.” Debarking is a form of mutilation involving the complete and irreversible destruction of the dog’s larynx or vocal cords. This painful surgical procedure leaves the dog permanently defenseless and psychologically damaged. Loneliness, boredom and distress are the top three reasons dogs bark persistently, according to Pat Miller, CDBC, CPDT, past president of the Association of Pet Dog Trainers. Because dogs tend to bark more in groups, it’s irresponsible to keep many dogs near neighbors, and it’s cruel to devocalize them to compensate for that poor judgment. If Mush with P.R.I.D.E. condemned debarking, they would say so.

Here’s what experts say about the cruelties of debarking:

“‘Debarking is not a medically necessary procedure,’ Dr. Klausner said. ‘We think it’s not humane to the dogs to put them through the surgery and the pain. We just do not think that it should be performed.'”

– Dr. Jeffrey Klausner is the senior vice president and chief medical officer of Banfield, the Pet Hospital, which has more than 750 veterinary practices across the country.
– Sam Dolnick, New York Times, February 2, 2010

“These amputations are strictly for the benefit of the owner. They serve no therapeutic or medical purpose. They are not surgeries in the true sense of the word.

The word mutilation is much more appropriate.”

– Charles Danten, DVM, in a speech presented to the Montreal Rotary Club on January 6, 2000, and published on Dr. Danten’s website

“[Dr. Nicholas] Dodman said there is a risk to any surgery, but operating in the vocal cord area is very dangerous because it’s hard to administer anesthetics and there’s a lot of blood in the area. Animals may suffer from infections, scar tissue, trouble breathing, and hemorrhaging or aspiration pneumonia from devocalization procedures.

‘Some dogs have died in different stages (of the procedure),’ said Dodman. ‘This is what’s called a convenient surgery. Some surgeries are necessary. But this is a cosmetic surgery like ear cropping and tail cropping. You’re removing a natural part of a dog.’”

– Dr. Nicholas Dodman, DACVB is a veterinarian behaviorist of about 50 in the world.
– David Ertischek, West Roxbury Transcript, June 16, 2009 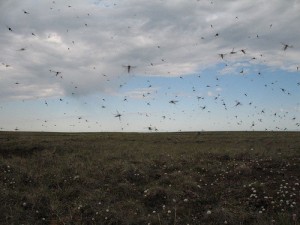 Alaska has many mosquitoes and this photo shows a small number of them. Mosquitoes attack dogs who are chained outside. Photo attributed to mecocrus on flickr, taken July 8, 2008

“Excessive tissue removal results in scar tissue formation that can interfere with breathing.”

“Dr. Gary W. Ellison, of the College of Veterinary Medicine at the University of Florida, cautioned that the procedure can lead to complications. He said he has had to operate on debarked dogs after excess scar tissue built up in the throat, making it difficult for the dog to breathe.”

Dr. Paula Kislak: “This surgery is especially bad, because even under the best of circumstances animals, because of the messing around in the throat area, that are debarked are more prone to aspirate their own digestive juices. And when dogs are put under these intense circumstances of racing and they’re gasping all the time, they’re constantly aspirating or inhaling any vomit or digestive juice that comes up in their mouth, and that sets them up for life-threatening aspiration pneumonias. So that’s a double whammy of the debarking.”

Rob Moore: “This debarking, what is the procedure?”

– Dr. Paula Kislak, DVM, is president of the Association of Veterinarians for Animal Rights
– Rob Moore hosts Animal Voices, a radio show in Toronto Canada.
– This interview was done on February 28, 2006

In the section entitled Exercise and Conditioning there is a subsection entitled “Weight Pulling.” Dogs are specifically bred to perform many tasks including herding, gathering, burrowing, pulling wheelchairs etc., but pulling exceptionally heavy loads is not one of them. Training dogs to pull great weight goes against the dogs’ natural instincts. Making them behave so unnaturally involves abusive training that results in harm and deformity to the dog. 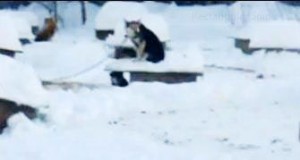 Dog shelters are buried in the snow.
Photo courtesy of SledDogma.org

The USDA policy, under the Animal Welfare Act, rejects tethering as an inhumane practice that is not in the animal’s best interests. The permanent chaining of dogs is prohibited in all cases where federal law applies. In the section entitled Confinement Systems, Mush with P.R.I.D.E. opposes this conclusion and encourages mushers to permanently tether their dogs.

Their guidelines say: “The optimal length of the chain is somewhat longer than the height of the pole or post.” So, for example, if a musher decides to use a four foot post, Mush with P.R.I.D.E. thinks it would be best for him to keep the dog on a chain that’s a little over four feet long. Mush with P.R.I.D.E. doesn’t say that musher should never use a two, three, four or five foot post or pole, etc.

Their guidelines also say: “Whichever tethering method you use, space the post so that adjacent chains can’t overlap and so that dogs can’t tangle or strangle each other.” Dogs shouldn’t be harmed by each others chains. But, it’s important to note that the tethering systems described by Mush with P.R.I.D.E. do not allow for normal dog interactions and severely limit the dog’s ability to exercise. The organization doesn’t say that dogs should be taken off their chains when they’re not on training or conditioning runs. It’s been reported that dogs who don’t make the main teams are never taken off their chains. The USDA has determined that tethering eliminates normal dog interactions and severely limits the dog’s ability to exercise.

The USDA has also concluded that tethering causes many injuries. Mush with P.R.I.D.E. ignores the abundant evidence that tethering dogs is cruel. For information on the many ways it’s unsafe and inhumane, click on HORRORS OF CHAINING.

Mush with P.R.I.D.E. doesn’t recommend that dogs get dental care. On About.com, Dr. Janet Tobiassen Crosby, DVM, says: “Infected gums and teeth aren’t just a problem in the mouth — the heart, kidneys, intestinal tract, and joints may also be infected. The tartar and any infected areas of the mouth contain a multitude of bacteria than can ‘seed’ to other parts of the body. With regular dental care, you can prevent some of these more serious side effects.”

Mush with P.R.I.D.E. doesn’t recommend that dogs be bathed. The ASPCA website says: “The ASPCA recommends bathing your dog at least once every three months. Your pet may require more frequent baths if she spends a lot of time outdoors.”