Drug and alcohol abuse by mushers 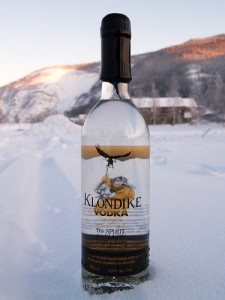 Intoxicated mushers may race dogs in the Iditarod. The rules do not require the Iditarod’s Race Marshall to discipline mushers who are half in the bag. Photo attributed to Ranger Cord on flickr

[When it’s been so difficult to develop effective drug tests for humans, you know the same difficulties also occur with dogs.]

“Doping experts have long known that drug tests catch only a tiny fraction of the athletes who use banned substances because athletes are constantly finding new drugs and techniques to evade detection.”

“You can test for designer drugs, but only if you know what you’re looking for, says Jon Danaceau, an associate toxicologist at the University of Utah’s Center for Human Toxicology.

‘If somebody comes up with a completely novel drug that we don’t know to look for it, yeah, it’s possible that we can miss it,’ Danaceau says. 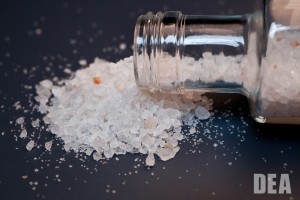 Bath salts. Drug tests only catch a tiny number of people who use banned substances. For example, there are hundreds of bath salt compounds and only tests for 40 of them. The Iditarod isn’t testing for every drug mushers may use. Photo attributed to DEA

Another problem is that dopers are using synthetic versions of stuff the body already makes — like human growth hormone and erythropoietin (EPO), which boosts red blood cells. Even sophisticated tests can’t always tell the difference.

And there are so many new drugs that it’s hard for testers to keep up. [Dr. Charles] Yesalis say these drugs are intended for people with potentially deadly diseases such as cancer or muscular dystrophy.

‘But there are these unethical medical scientists that are sitting up in the trees like vultures waiting to pounce on them for their use in athletics,’ Yesalis says. ‘And some of these drugs work well.’

Even knowing what drugs to test for might not be enough. Future dopers are likely to try gene doping, which will be almost impossible to detect.

Lee Sweeney from the University of Pennsylvania is working with a gene that can be injected into a muscle to make the muscle larger. It works on rodents and dogs.”

“‘We are not testing for everything that may be out there,’ said Dr. Barry Logan, one of the nation’s leading toxicologists.

That’s because they can’t.

Clandestine labs are using more than 100 chemical compounds to make synthetic marijuana, but even the most sophisticated lab can only test for 17, said Logan, director of Forensic and Toxicological Services at NMS Labs in Pennsylvania….

Bath salts, also known as synthetic amphetamines, are also hard to track for the same reason.

There are hundreds of bath salt compounds out there, but toxicologists can only test for 40, Logan said.

‘This is always a moving target,’ Logan said. ‘As soon as a test exists for something, there are new compounds waiting in the wings. We are always a step behind.'”

The Iditarod’s policy and program of testing mushers for drugs is a total sham. Iditarod officials don’t even get the results of the drug tests until many days after the race has ended. As a result, mushers who used banned substances can’t be disqualified from the race when they tested positive. Under Iditarod “Rule 29-Use of Drugs and Alcohol,” (subsequently Rule #30) violators of the race’s drug and alcohol policy may be ineligible to participate for a specified period of time in future races. It’s important to note that the Iditarod didn’t commit to punish violators of its rule, and it didn’t commit itself to report illegal activity to local authorities.

“Alcohol or drug impairment, the use of prohibited drugs by mushers, and positive results on drug or alcohol tests administered during a Race are each prohibited. Violations of this policy shall result in disqualification from a particular Race, and may result in ineligibility from participation for a specified period of time in future Races.”

But Iditarod Trail Committee executive director Stan Hooley said a new rule calling for drug testing isn’t clear enough to allow them to impose sanctions against the mushers, who were among the back-of-the-packers in the 1,000-mile race.”

“When discussing the new testing policy before the March 6 start of the race, Iditarod officials said any positive results would be announced along with the names of those testing positive for banned substances.”

“Without sanctions, it would ‘not be prudent’ to release the names, Hooley said. But he acknowledged they were among the last 15 competitors to reach the finish in Nome.”

Mushers who tested positive were among the last 15 competitors to reach Nome:

“Without sanctions, it would ‘not be prudent’ to release the names, Hooley said. But he acknowledged they were among the last 15 competitors to reach the finish in Nome.”

All mushers not tested for drugs

Iditarod said all mushers would be tested:

“The tests will take place somewhere along the trail, but race officials will not say where or when. [Stan] Hooley also says every musher will be tested, not just certain mushers.”

Some mushers tested for drugs at White Mountain checkpoint:

“This is also the first place I’ve seen drug testing of mushers on the trail. The checkpoint is in the village city hall building, and Mackey spent a few minutes behind a door with a hand-made “Work Safe” sign.”

– Kyle Hopkins, Anchorage Daily News – The Sled Blog, March 15, 2010
– Kyle Hopkins is at the White Mountain checkpoint, which is 77 miles from Nome.

“As mushers arrive in White Mountain, they’re being pulled aside for testing. Mackey was the first.”

Mushers who didn’t finish the Iditarod were not tested for drugs:

In the 2015 Iditarod, 12 mushers dropped out before they could be tested for drugs at the White Mountain checkpoint. According to the Iditarod’s website, they are the following mushers: Bryan Bearss, Gwen Bogart, Zoya DeNure, Ellen Halverson, Scott Janssen, Katherine Keith, Jim Lanier, Christine Roalofs, Brent Sass, Gerald Sousa, Jan Steves and Philip Walters.

In the 2016 Iditarod, 14 mushers dropped out or were withdrawn before they could be tested for drugs at the White Mountain checkpoint. According to the Iditarod’s website, they are the following mushers: Jan Steves, Ellen Halverson,, Billy Snodgrass, Lance Mackey, Jim Lanier, Cim Smyth, Robert Redington, Ryan Redington, Scott Janssen, Rick Casillo, Charley Bejna, Hans Gatt, Zoya DeNure and Martin Koenig.

In the 2017 Iditarod, eight mushers dropped out before they could be tested for drugs at the White Mountain checkpoint. According to the Iditarod’s website, they are the following mushers: Roger Lee, Monica Zappa, Ellen Halverson, Dave Branholm, Ryan Anderson, Mark Selland, Mark May and Otto Balogh.

Mushers use of marijuana

Marijuana is easy to get:

“On Tuesday, voters approved Ballot Measure 2, an initiative legalizing recreational marijuana in Alaska, by about 52 percent in favor to 48 percent opposed, with 100 percent of the state’s precincts reporting.”

“Marijuana” means all parts of the plant of the genus cannabis whether growing or not, the seeds thereof, the resin extracted from any part of the plant, and every compound, manufacture, salt , derivative, mixture, or preparation of the plant, its seeds, or its resin, including marijuana concentrate.”

an- Chapter 38. The regulation of marijuana, State of Alaska Division of Elections, website, 2014

– Marijuana concentrates can have THC levels as high as 85 percent:

[THC is the mind-altering ingredient found in marijuana.]

“Concentrates mean that marijuana that can have levels of THC as low as 23 percent is boosted to as much as 85 percent THC when it’s transformed into wax, honey oil and shatter, the DEA says.” 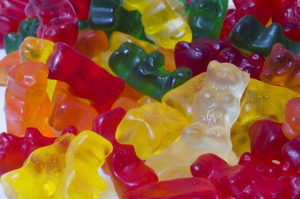 Gummy bears. Some gummy bears have marijuana in them. Photo attributed to JanmiS on flickr.

“People who used high-potency cannabis on a daily basis – with THC levels exceeding 10 percent – were nearly five times more likely
to have a psychotic episode, compared with those who didn’t, according  to a new study in The Lancet Psychiatry.”

– Many types of edible marijuana:

Mushers smoked marijuana in Iditarod before it was legalized in Alaska:

“[Lance] Mackey, a throat cancer survivor who has a medical marijuana card, admits to using marijuana on the trail….”

[Should the Iditarod have allowed Mackey to risk the safety of the dogs and of himself due to impaired judgment?]

“Alaska was no longer a pot smoker’s haven. As a result of the recriminalization measure adopted during the November general election, possession of small amounts of marijuana was now punishable by a $1,000 fine and up to 90 days in jail. But cops weren’t patrolling the Iditarod Trail as [Tom] Daily and I shared a few puffs on the crest of a barren hill.”

– O’Donoghue, Brian Patrick. My Lead Dog was a Lesbian, New York, Vintage Books, 1996
– O’Donoghue was a reporter for the Fairbanks News-Miner

“While mushers have been known to blow marijuana smoke near their teams to calm the dogs, some suggest the testing program is aimed at the wrong group.

‘We joke that they should test more mushers than dogs,’ [Martin] Buser says. 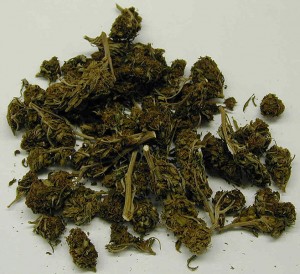 Musher who tested positive for marijuana wasn’t banned from Iditarod:

“Juneau musher Matt Giblin has been stripped of his 38th-place finish in the 2012 Iditarod after testing positive for THC, the active ingredient in marijuana, race officials said Thursday.”

“An appeals board found that the veteran racer must repay the $1,049 he earned for finishing this year’s race, said Race Marshal Mark Nordman.”

– From the Sled Dog Action Coalition: The Iditarod could have made Matt Giblin ineligible from participating in future races, but they did not do so. Rule 30-Use of Drugs and Alcohol says “Alcohol or drug impairment, the use of prohibited drugs by mushers, and positive results on drug or alcohol tests, administered during a Race are prohibited. Violations of this policy shall result in disqualification from a particular Race, and may result in ineligibility from participation for a specified period of time in future Races.”

High on meth during Iditarod

“A positive drug test for methamphetamine has disqualified veteran dog musher Lance Mackey from the 2020 Iditarod Trail Sled Dog Race, according to a message that race organizers sent to sponsors early Thursday.” 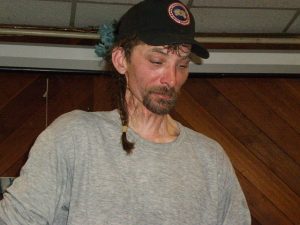 Lance Mackey, Wikimedia Commons. He tested positive for meth during the 2020 Iditarod.

Lance Mackey high on meth during the 2020 Iditarod in March. But it took until May for him to be disqualified from that race:

“Mackey’s 21st place finish in this year’s race will be vacated after the positive test from a sample collected in White Mountain, the Iditarod statement says. Mackey finished the race, his 16th Iditarod, in Nome on March 19.” 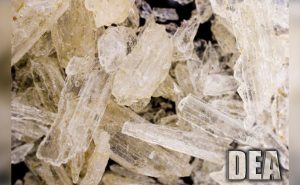 What are the effects of meth?

“Meth can make a user’s body temperature rise so high he could pass out or even die.”

“A user may feel anxious and confused, be unable to sleep, have mood swings, and become violent.”

“He may become paranoid. He may hear and see things that aren’t there. He may think about hurting himself or others. He may also feel as though insects are crawling on or under his skin.”