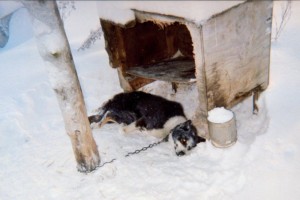 Dead Iditarod dog tethered to a pole in a musher’s kennel. Because the tether is extremely short, the dog could not even get inside his pathetic shelter. Most Iditarod dogs die alone. Their deaths are kept secret.

Recreational mushing and the Iditarod are very different:

“As in all sports, there will be the hobbyists, the recreationists, those who participate or support for the love of the sport – and then you will have those who will risk everything, including the lives and health of their dogs, for the sake of winning…spurred on by corporate sponsors who love the value for advertising dollar of extreme sports. There is about as much similarity between recreational mushing and the Iditarod as there is between having a nice gallop with your horse and running the equivalent of a Kentucky Derby that goes on for days.”

– Jim Willis, Director, The Tiergarten Sanctuary Trust
– Mr. Willis is the author of the acclaimed book Pieces of My Heart – Writings Inspired by Animals and Nature, http://www.crean.com/jimwillis 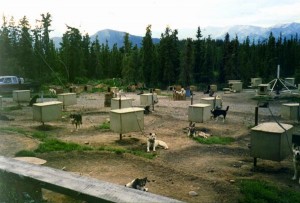 “Unlike more competitive counterparts in the Iditarod and Yukon Quest races, recreational mushers like [Zak] Richter are driven by a different purpose than reaching the finish line as fast as they can.

“They simply enjoy traveling through the country with dogs at their own pace . ‘It’s having a mindset of doing what the family can do, not running at the maximum potential of your youngest dog,'” Richter said.

“Few recreational mushers cull or sell dogs, choosing instead to keep them for the duration of their lives. Doing so inevitably produces a retirement-home-type situation.

‘My yard is really big because I have a lot of old dogs,” [Helyn] Lefgren said. “I don’t get rid of them when they get old or can’t run fast enough.

“All the recreational mushers I know have the same commitment to the dogs,” she said.