Not connected: Iditarod and delivery of serum to Nome in 1925

“Vi Redington: ‘Originally, we most certainly did not think of our race of the race trail in any connection whatsoever with the famous Nanana-to Nome Serum Run. We had no intention to connect the two.’” 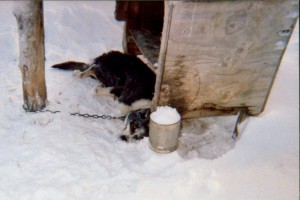 Dead Iditarod tethered to a pole in an Iditarod musher’s kennel. Because the tether is extremely short, the dog could not even get inside his pathetic shelter. Most Iditarod dogs die alone and their deaths are kept secret.

Iditarod celebrates a musher’s memory not delivery of serum in Nome:

The idea for the Iditarod started with Dorothy Page.

“(In 1967) run in two heats over a 25-mile course, the race was officially named the Iditarod Trail Seppala Memorial Race, in honor of mushing legend Leonhard Seppala.”

“Over the years, the Iditarod Trail Sled Dog Race’s origins have been closely linked with the ‘great mercy race’ to Nome. Most people believe the Iditarod was established to honor drivers and dogs who carried the diphtheria serum, a notion the media have perpetuated. In reality, ‘Seppala was picked to represent all the mushers,’ Page stressed. ‘He died in 1967 and we thought it was appropriate to name the race in his honor. But it could just as easily have been named after Scotty Allan. The race was patterned after the Sweepstakes races, not the serum run.'”

(Bill Sherwonit reported on sled dog racing for over ten years for the Anchorage Times. He wrote articles for numerous publications including National Wildlife magazine and the Anchorage Daily News.)

Half of the 1925 serum delivery was done by train. Dogs ran in relays for the remaining 674 miles, with no dog running more than 100 miles. In the Iditarod, dogs run 1,150 miles over terrain far more grueling than the terrain found on the serum run route. 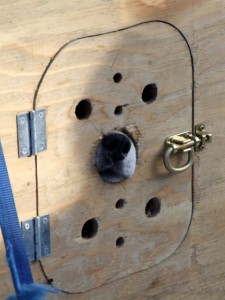 Iditarod does not honor history

“With reference to Thomas Thuneman’s letter, it needs to be said that the Iditarod Race does not honor history (“Iditarod dogs love running, and race reminds us of history,” May 14). The serum run was done in relays and not a grueling, money-oriented 1,100-mile race. Change the direction of the Iditarod race to honor “true history” and there will be more support and far less criticism.”

Ethel Christensen: “Absolutely not. They try to say they’re commemorating the serum run. The serum run was 674 miles from Nenana to Nome and it was done in relays by 20 different men and the longest haul of the serum was 91 or 92 miles and that was Leonhard Seppala. Now he did not deliver it to Nome. He went, I think, to Shatoolik to Golovin, which was probably the worst part of the trail. But it arrived in Anchorage by boat and to Seward and then fortunately the railroad had been built in 1917 to Nenana. And It went by railroad to Nenana. So, it does definitely, definitely not commemorate history.”

– Ethel Christensen is the founder and former director of the Alaska SPCA.
– Rob Moore hosts Animal Voices, a radio show in Toronto, Canada.
– This interview was done on February 28, 2006

“The Iditarod, the thousand-mile-plus sled dog race underway in Alaska, is partly portrayed by promoters as a link to Alaska’s cultural heritage, to pre-snowmobile times, when Alaskans used dogs for winter transportation.

However, not all Alaskans buy that interpretation. Fact is, many of them believe pioneering Alaskans would be appalled to see the punishment endured by the dogs during the Anchorage-to-Nome race.” 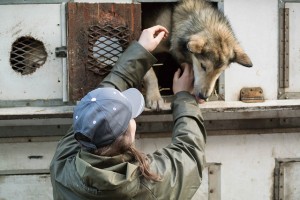 “Sportswriter Fattig of the Anchorage Times interviewed a couple of Alaskans from McGrath, one of the race’s checkpoints, and found them outspokenly opposed to the length of the race. They pointed out that Alaskans of pre-snowmobile years would never run a dog team a thousand miles.

‘We knew Leonard Seppala (one of the mushers in the 1925 diphtheria run to Nome) and that little guy would turn over in his grave if he knew what was happening,’ Margaret Mespelt, 76, an Alaskan since 1929, told Fattig.”

“Largely unnoticed, the Iditarod Trail Committee has slipped what could be a significant game-changer into the rules for the running of The Last Great Race.

Mushers headed from Willow to Nome will, for the first time, this year be allowed to use GPS position indicators to keep track of where they are along the 900-mile trail, race spokesman Chas St. George said Thursday. While the Iditarod uses GPS to track teams along the trail, the use of GPS by competitors themselves has been hotly debated for years.

Some have argued that using modern technology to find the way north in a race that celebrates the old Alaska is sort of cheating.”

Iditarod mushers are allowed to use cell and satellite phones:

“After a vote by the board of directors last fall, mushers are now allowed to carry two-way communication devices, like cell and satellite phones.”

Mushers equipped with the most high-tech outdoors equipment:

“Mushers are equipped with the most high-tech outdoors equipment available, including custom-made sleds with adjustable runners for varying snow conditions and, starting this year, global-positioning-satellite devices to check on their progress.” 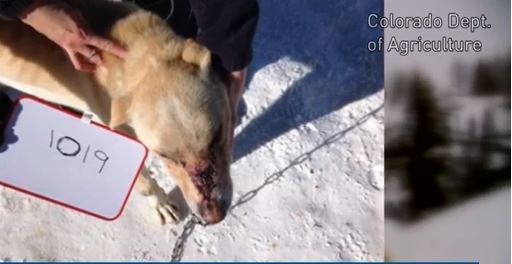 Krabloonik dog with open sores on his snout. Krabloonik is owned by Iditarod musher Dan MacEachen. Photo attributed to the Colorado Department of Agriculture.